So it is true, the punch hole display we’ve been hearing about was no rumor after all. The Infinix S5 actually came out just as many had projected it to be. Picture wise in particular.

Say hello to the Infinix S5, the next generation in the S series line-up, the successor to the S4, the first Infinix flagship to have a punch hole display…I can go a whole list if you want me to.

On a very good day in the month of October, Tuesday to be precise, Infinix showed her first punch hole display smartphone to the world at her launch event in India. They called it the S5.

This is a new era, we are gradually if not already in the process of saying goodbye to the notch display very soon. Dear friends, it’s about time you start upgrading your smartphones in Tanzania.

The punch hole is not the only thing here, big screen is also heavy too. Wait… are we going to grabbing big phones too? Since almost every new smartphone now comes with huge display.

The Infinix S5 cost about Tsh. 360,000 which is just an inch higher than the price of her predecessor, affordability is checked her too because it is a smartphone you can affordable to buy in Tanzania.

The Infinix S5 comes in two attractive colors: quetzal cyan and violet. It is now available for purchase in online and offline stores in Tanzania. You can buy one and enjoy.

The design is the most interesting part of the Infinix S5. Infinix just showed us what it means to put in the work. They have continued to shower multiple love on the S series for some time now, I wonder why they love this S series so much. 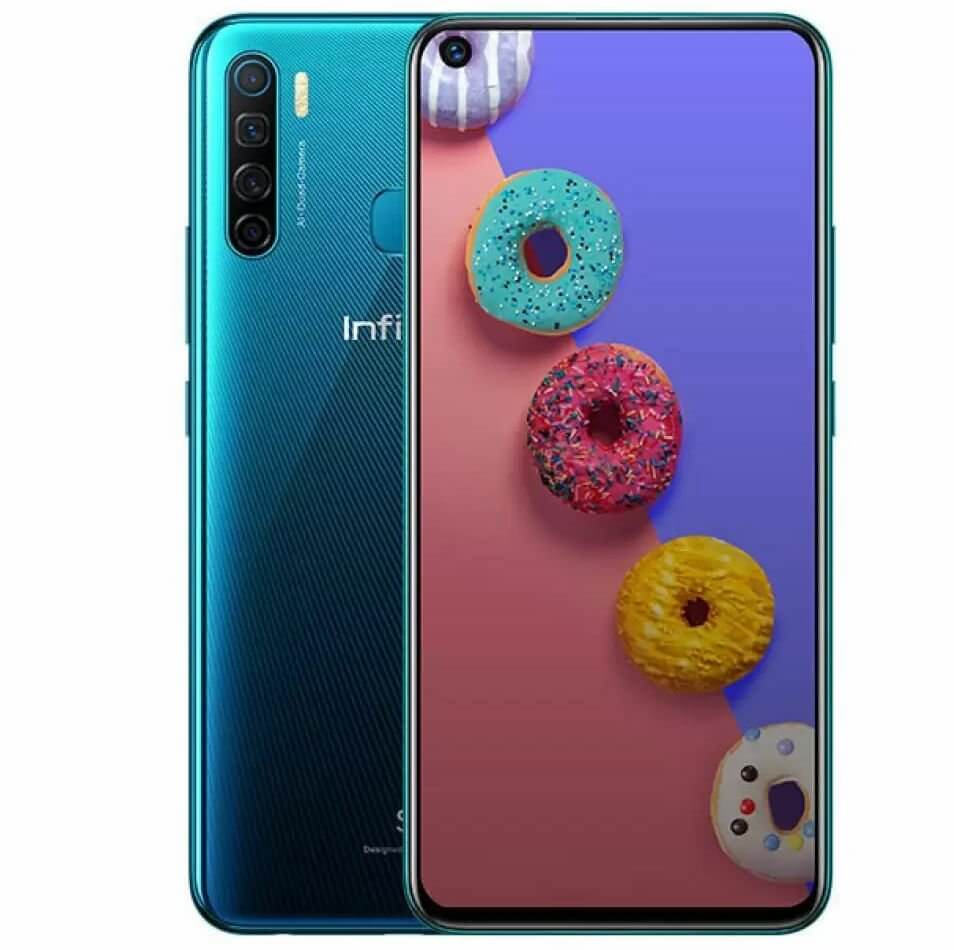 If you have been following, you will notice that Infinix always like to introduce some breath taking features on the S series before spreading it out to other variants. I guess that’s the way to go.

On the Infinix S5 is a crystal feather glass back design with a 2.5D glass in front. There is no notch as stated earlier, what we have here is a punch hole that represents the selfie camera.

On the right of the Infinix S5 is the volume and power button, while the triple card slot for microSD and dual nano-sim is on the left. At the bottom there is a 3.5mm headphone jack, micro USB port, speaker grill and microphone.

The Infinix S5 comes with Dirac HD surround which assist the speaker with better audio clarity. Just know that whether you are using a headphone or buds on the S5, Dirac will perform some magic for you.

Just like I said earlier, the screen on our smartphones are becoming bigger by the day. It’s like every time a new phone goes official in Tanzania, we get to see larger screens. 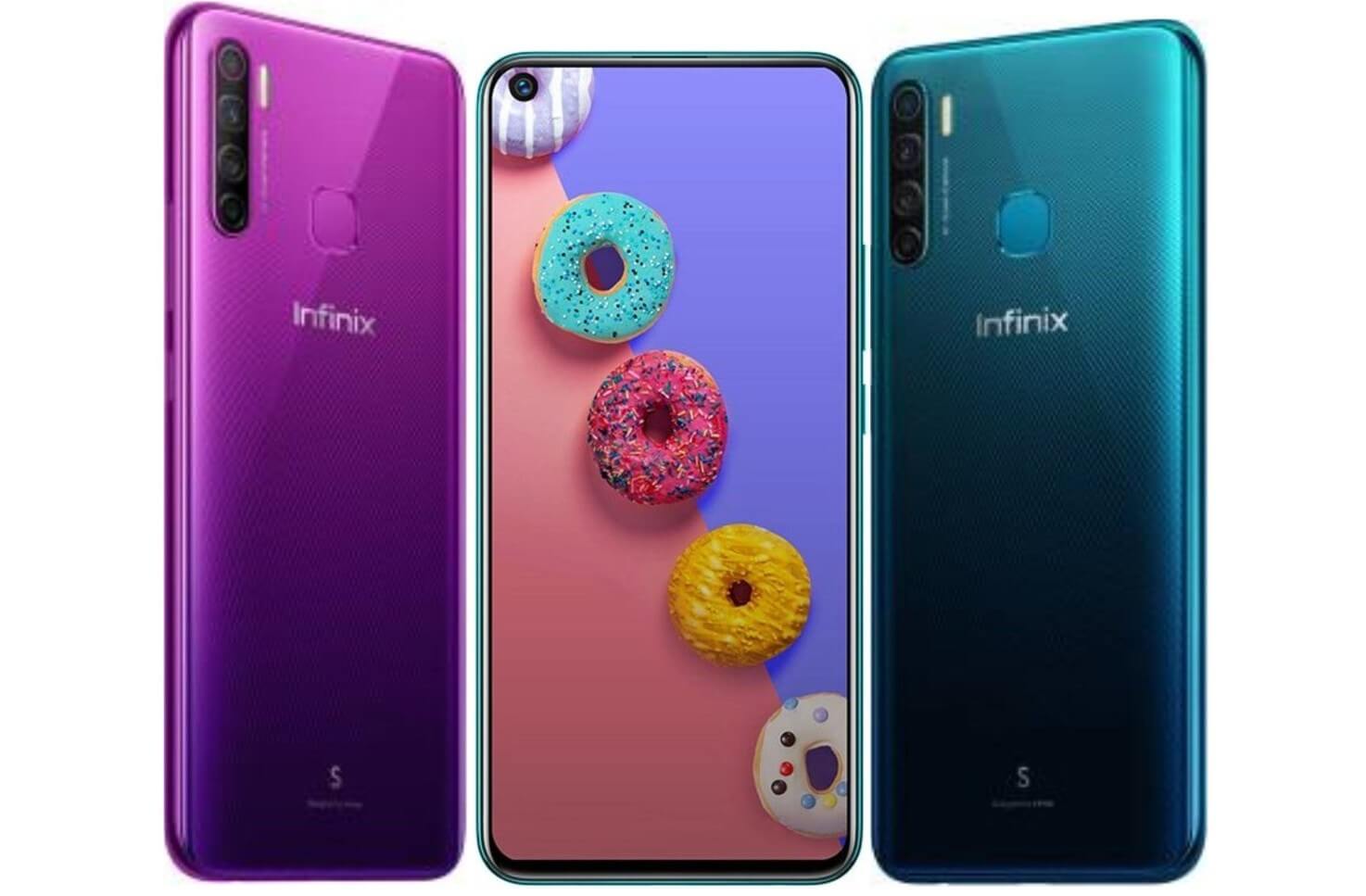 It is no different here as Infinix is also of the same opinion that smartphone screens should continue to increase. Hmm…. I hope we are not going to be seeing tablet sized screens next.

The Infinix S5 comes with a 6.6 inch HD+ punch hole display that is vivid, clear and bright. It has a 720 x 1600p resolution with rich color gamut and 72% NTSC which is okay for a budget smartphone like this in Tanzania.

Since there is no notch or huge bezels standing in the way, you are going to be enjoying up to 95% screen to body ratio and a 20:9 aspect ratio to cool things up.

With this massive display on board; gaming, movies and a whole bunch of viewing will be eye catchy. Just picture yourself watching a movie on a full-screen like this, I believe your friends will come after you.

There is no front-facing flash here as expected since there is no notch here either. However, you will get a screen flash that works like the flashlight in front.

At the back of the Infinix S5 are four solid vertically placed cameras that comprises of: 16MP + 5MP + 2MP + QVGA and a LED flash to support in dark scenes.

The camera has wide-angle lens which stands at 114 degree, there is also a super macro lens 2.5cm focus that helps to capture images of objects that are very close to the camera.

On the Infinix S5 is a 4000mAh non-removable battery that is serving as a power house to this very smartphone. it comes with an AI smart power management that helps to extend battery life for longer hours.

With that installed, you are sure of getting a complete day of usage with the Infinix S5 in your custody. Light users in Tanzania will definitely scale through the next day.

The Infinix S5 comes with Android 9.0 Pie Operating System that is based on XOS 5.5 cheetah UI which we all know is Infinix primary user interface. 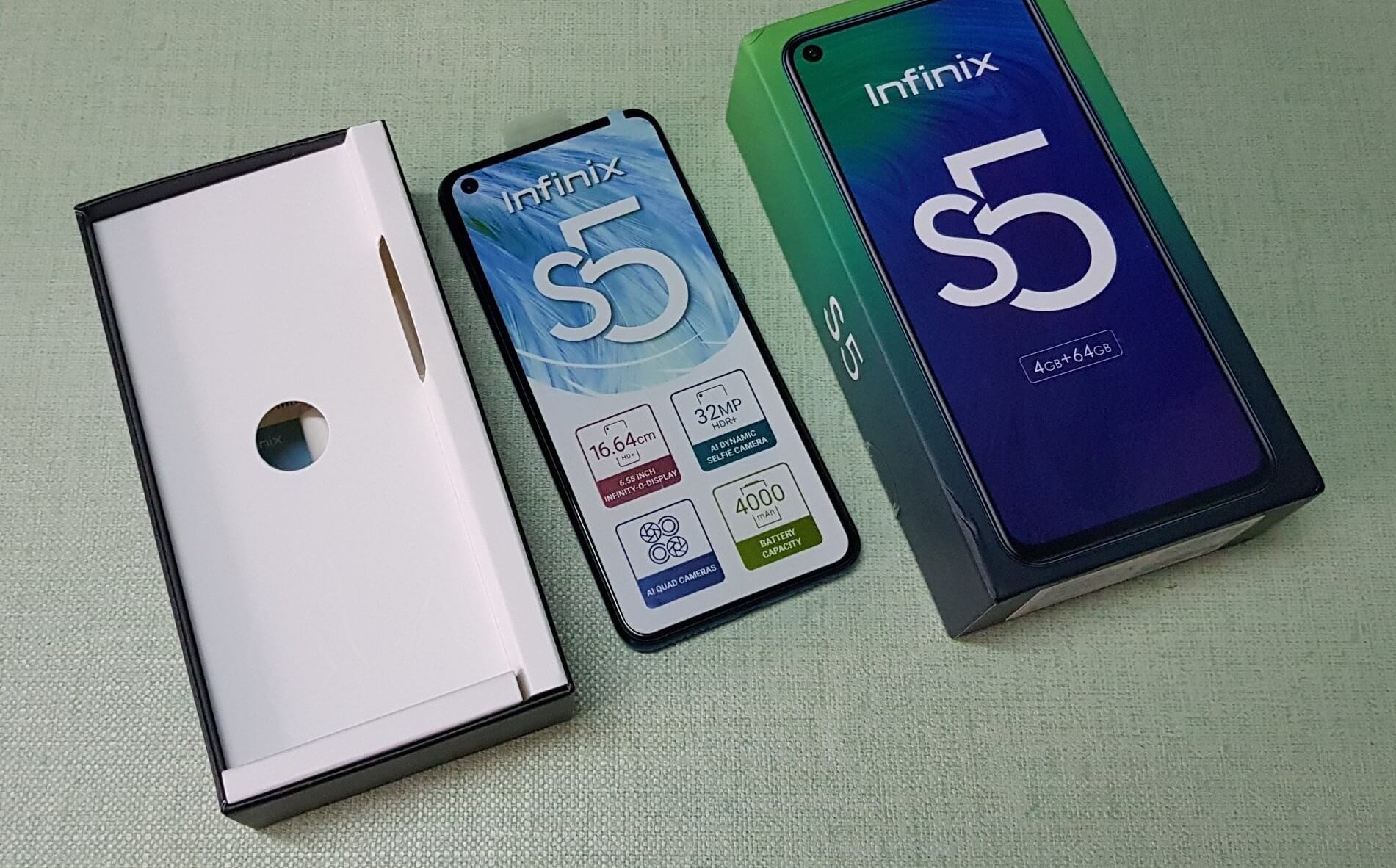 The XOS 5.5 cheetah User Interface now have some nice gesture swipes that can help you play music and receive phone calls in Tanzania.

On the spec sheet, we’ve got a 4GB RAM and 64GB ROM. The Infinix S5 runs on Helio P22 octa-core processor. There is also a fast and more secure fingerprint scanner at the back with face unlock in front.